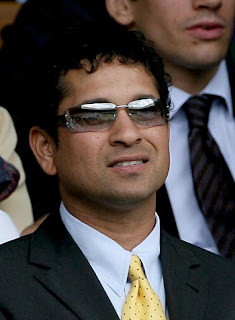 So our little master did it again... he surprised the world by achieving the position of Group Captain in Indian Air Force. He now has the habit of achieving such a great heights. He has a huge fan following in the world and In India

"Cricket is the religion, and Sachin is the God...".

Tendulkar was born in Bombay (Mumbai) to a marathi family. His father Ramesh Tendulkar was a marathi novelist. He named him after his favorite musician Sachin Dev Burman. His brother Ajit Tendulkar encourages him to play cricket. When he join MRF Pace Foundation... he wanted to be a fast bowler.. but Denies Lillee, Auatralian fast bowler suggested him to focus on his batting.
On 11 December 1988,when he was just 15 years and 232 days old, Tendulkar scored 100 not out in his debut first-class match for Bombay against Gujarat, making him the youngest Indian to score a century on first-class debut.
Dilip Vengaskar picked him up for the tour to Pakistan in 1989. In Pakistan, in his first test match he was bowled by Waqar Younis at a score of 15 runs.
It had taken him 79 ODIs to score a century.. but he never looked back after that.
He has a record of making 94 centuries till date in international cricket. This is not the end... he has scored most runs on the planet. And many of such records..
Here is a small story about him when he started his cricket coaching under Ramakant Achrekar..
When Sachin Tendulkar becomes exhuasted after practice sessions.. Achrekar would put a one-Rupee-coin on the top of the stumps, and the bowler who dismissed Tendulkar would get the coin. If Tendulkar passed the whole session without getting dismissed, the coach would give him the coin. Tendulkar now considers the 13 coins he won then as some of his most prized possessions.


After all these achievements ...  Tendulkar became the first sportsperson and the first personality without an aviation background to be awarded the honorary rank of Group Captain by the Indian Air Force.
I think there is nothing left for him to achieve... :)
But everyone knows he wont stop ever...

P.S.: During the Australian tour of India in 1998 Matthew Hayden said "I have seen God. He bats at no. 4 in India in Tests."