INDIAN OF THE WEEK -- SATYAJIT RAY

Whenever world’s Film Community will talk about greatest guys of all time in Cinema, he will always be there. No one can ever forget his contribution to the World Cinema. 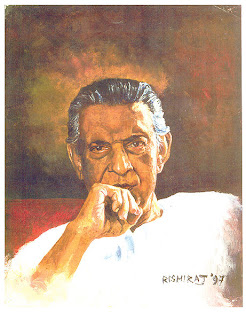 I am talking about Mr. SATYAJIT RAY. Yes he is the man, whose work got lots of critical acclaim worldwide. And he was regarded as one of the greatest auteurs of 20th century cinema.
Born on 2nd May 1921 in Calcutta, he was an Indian Bengali Filmmaker. Ray started his career as artist, but later took independent film making as career after meeting French Filmmaker Jean Renoir and viewing the Italian master piece “Bicycle Thieves” in London.
In his entire career he shot 37 films, which includes feature films, short films and documentaries. Ray’s first film Pather Panchali wan 11 international awards in 1955. Aparajito and Apur Sansar complete the triology named “The Apu Triology”. He won 37 national awards from Indian Government during his film career. He became the first Indian to win Academy Award in 1991. He was also a fiction writer, publisher, illustrator, graphic designer and film critic. Ray designed covers for many books, including Jim Corbett's Maneaters of Kumaon, and Jawaharlal Nehru's Discovery of India.
Upendrakishore Ray, Ray's grandfather was a writer, illustrator, philosopher, publisher, amateur astronomer and a leader of the Brahmo Samaj. Sukumar Ray, Upendrakishore's son, was a pioneering Bengali writer of nonsense rhyme and children's literature, an illustrator and a critic. So I must say that he had a great ancestry.
I have seen his work in The Apu Triology and Shatranj Ke Khiladi. And I was very impressed from his work in those films. Shatranj Ke Khiladi (1977) was his first non Bengali film and it was based on Munsi Premchand’s Novel with the same name. On 23rd April 1992 Ray left the world after a long period of illness.
Up to some extent, I feel so proud to have a film maker like him in India. I was happy to see his film The Apu Triology in worlds top 100 films of the 20th century. Want to see his work more and I am eagerly waiting for his documentary on Sikkim which was banned by censor board. Now this film is about set to release on his next birthday i.e. ; 2nd May 2011.

P.S.: I hope for the future directors that they would achieve more than him and make India proud.