I am talking about THE BERMUDA TRIANGLE. 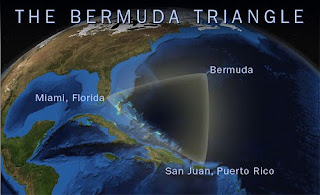 Yes Fellas! The mystery behind BERMUDA TRIANGLE is solved, at least American scientists say so.

According to them there was never any paranormal or alien activities in Bermuda Triangle and all the other theories had no basis or proof. Scientists said, "There was a massive methane explosions in that area, that  results in disappearance of ships and air-crafts."

The presence of methane hydrates initiates enormous eruptions of methane bubbles that would swamp a ship, and projected high into the air- to take out flying airplanes.

Any ships caught within the methane mega-bubble immediately lose all buoyancy and sink to the bottom of the ocean. If the bubbles are big enough and possess a high enough density they can also knock aircraft out of the sky with little or no warning. Aircraft falling victim to these methane bubbles will lose their engines-perhaps igniting the methane surrounding them-and immediately lose their lift as well, ending their flights by diving into the ocean and swiftly plummeting

P.S.: Nice to read and nice to find out the reasons.