She laughed out loud


It was my first day in school. I was sitting on the first bench in the class with a girl, who later became my first crush of life. That day something happened, which shouldn’t have taken place in first.
I was making some stuff in my notebook, alphabets and all. I was sort of happy. All that noise of chitchatting was giving me feeling of being surrounded and safe. Suddenly everybody fall silent and stood at their respective places. I didn’t. I looked around, so found that a fat old lady was standing right in front of my desk and my teacher who was looking quite gracious before, became pale and silent.
But suddenly she said, “Prabhat, Stand up. Don’t you have any manner or respect of your elders? She is principal of this school.”

I didn’t give another thought and stood in haste. I was scared. But I have never done that to my parents, standing and saying “Gooood Mooorning! Maaadum!” or anything phony like that. I found that stupid and funny too. I respect my parents, but for what they gave me, love and care. If they would have scolding me since birth I must have not giving any damn to them.
And then that Old fat lady asked me a simple question, I know that was a sort of mixed weapon for punishment and revenge.
She asked me, “What is the colour of Water?”
But I was dumbfounded.
I wanted to say “blue” because I have seen in paintings, it is blue. But something inside me didn’t let that happen. That was the horror filled in my nerve.
She asked me again and said, “Tell me beta, whatever is coming in your mind”. 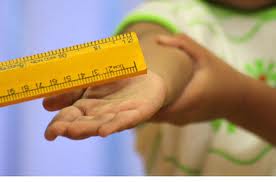 So, I gather all of my courage, and said, “Blue.”
And then she laughed.  She laughed out loud. Then class and class teacher also followed her.
That was the first assault of child’s openness to the Ideas. I was so shattered.
Then she took a thick stick and landed on both of my hands, one by one. That damage was not physical but that hit directly my mind. She closed my chapter before being open to this world.
Later I got to know that water is colourless, but that was too late.
I stopped further questioning from teachers, because I was afraid that she might slap me or beat me to death for my stupidity. I stopped asking my elders anything. I started saying yes to everything.
Now I am changed. I don’t take any shit just like that. But it took a lot of efforts and time to change. I lose many things in this process. I lose those people around me. I lose relations. But now I feel free. Free from the cage of limits.
I wish that old fat lady, wouldn’t have killed my confidence that day. I wish she would have taken my answer positively and could have asked me the reason behind that answer. I just needed a chance and freedom of expressing my thoughts. But she chooses otherwise and fucked my childhood.